Random musings and memories on the year that was. 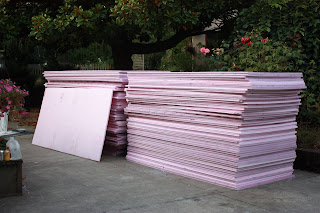 Finally getting to see what a "truck load of foam delivered to the house would look like" - A perfect example of be careful what you wish for. Be specific in your wishes. Especially delivery time, delivered at 10:30 at night kinda irritates the neighbors....oh, and I meant that I wanted it for me.
Sitting in a castle in Scotland with (the other, not husband) Jeff sitting on a fake throne with a sword in one hand and chain mail on his head looking like he was the happiest person on earth.
Watching marathons of QI on Dave TV while on vacation. I know TV on vacation?!?!? We are talking Steven Fry here people....I would watch anything he is involved with.
Finding that I have some really cool and super supportive blog friends out there.....thanks for letting me take up way to much of your time and always being so supportive.
Meeting the Bloodshed Brothers - realizing that I might have been mistaken to move from SoCal - who knew that Temecula would turn out to be such a cool place - well, at least cool people, cool people that bring me champagne. Those are the best cool people. :) 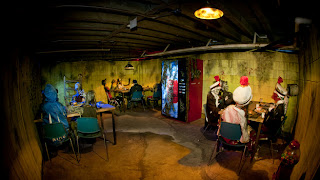 Standing in my driveway in front of 160 sheets of pink foam, talking to Tattoo on the phone about Extreme Home Makeover and wondering what the hell have we gotten ourselves into.....we cannot do this, we are in over our heads! Help! I am going to start freaking out!!!

Giving up Hauntcon and remodeling the basement to go to the UK. Really, that was a harder decision than you would think. 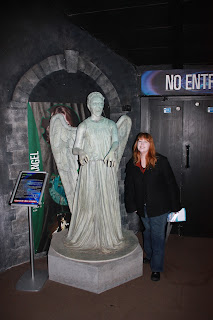 Walking into the Doctor Who exhibit in Land's End (Cornwall) the first prop we see is a Blink angel....we both squealed with giddiness. Moments like that you know you married the right person.

Cup of tea in hand, leaning on the window frame, enjoying the view of St. Micheal's Mount from our flat window in Penzance.

Feeling more than a little sad to discover the heads of the angels have worn off the abbey in Bath, that was always one of my favorite things to see.

Meeting yet another brilliant and uber talented Canadian. I think there is something in the water there. Ghoul Friday is even cooler in person than she is on her blog

Oh and ShellHawk - damn, I so want to be that awesome. She is on my list of people that I want to be in my next life...or this one. I think she might be using it right now...anyway, watching her work progress has been an huge inspiration. And she has the best convention outfits ever!

I smile every time I think of Alex from Extreme Home Makeover - one of the hardest working people I have ever met. Made the whole experience a blast. As she always said to us....20+ times a day (at least.) "You are a rock star!" - No, Alex YOU are the rock star!"

Davis Graveyard drive in! It is Hammer film time! Drinking is not just a good idea....it is manditory.

Rob Zombie is soft spoken, laid back and cool. 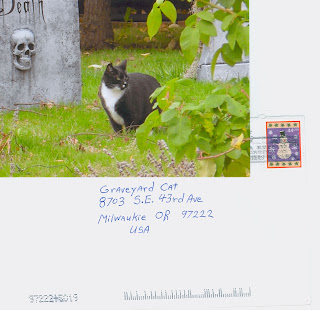 I will work a prop to death...sometimes past death.....It has taken us about three years to finally get my Luminary where I am happy with it.

Our crew is the best.  How many friends can you get to spend four days almost 24 hours a day working on a haunt that is not even ours.
A whole lot of people working away in a sea of pink foam. 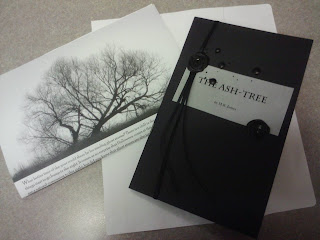 Learn from my lesson....if anyone from Extreme Home Makeover calls you say...."I am busy that weekend."  :D

Police stopping by, someone called because there was "a guy with a gun" in the neighborhood....it was just Dan webbing the yard! :D

Smiling faces on the students in our classes.

I discovered the story The Mousehole Cat and the show Doc Martin - thanks Cornwall - BTW you were lovely too.

Davis Graveyard theme song for the year was "Your Brains"

Interviewing Halloween bloggers is great fun...looking forward to talking to more of you.

I am never taking anyone on a ghost tour in Edinburgh. Next time I go by myself!

The bartender at our party tried to kill me. 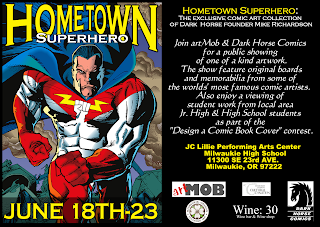 When creating a laying down body form out of chicken wire.....fill in the body form - cause when Hal sleeps on it while "guarding" the yard....the chest and stomach will collapse.

Batting and monster mud seemed like a good idea.....but is not. It is a really bad idea actually.

I lost many hours of my life to Plants vs. Zombies But I had a great time. 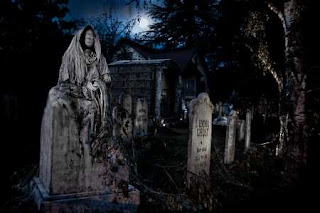 The singing statue. It may seem like a simple prop, but the journey was a long one. Not only did we have to figure out how the hell to build (hence the monster mud batting lesson) A friend of ours came over with his recording equipment to set up a mock "studio" in the house. Not only did Margie find and sing the coolest song...she had a friend of hers edit, perform and mix the song. Then she came back for filming. Watching that all fall into place was delightful.

I got the pleasure of introducing my blog friends to The Poxy Boggards....you are welcome :D

Husband and I still test our marriage every year while creating our video......seriously, putting up and running the display for a month is not near as grueling :D

Created two new props, sleeping beauty and TOT,  that came out right the first time.....I don't think that has ever happened.  We might be getting good at this :)
West Coast Haunters Convention. Ed and his kids did a bang up job of putting on the a great event. Here is to the future!!!
OMG! I have a signed to me, bottle of Crystal Skull vodka! How awesome is that!?!?!?
Virtually visited 26 abandoned haunted attraction rides. That was fun....and sad.
I have learned that not all pink foam is created equal. Even if it comes from the same store at the same time....
Planning a three week trip to the UK - with one week of it being with a group of people, some who have never traveled before....in October, while the yard is up was not one of our better ideas :)

I discovered Tim Minchin....how in the world did he fall under my radar!?

It REALLY sucks when it rains on our party night! 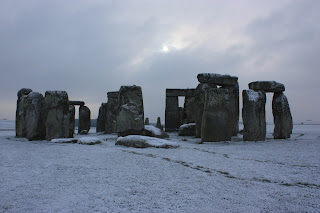 Stonehenge looks magnificent in the snow.